The Bowman's Strategy Clock is one of the strategic planning and positioning models given by Cliff Bowman and David Faulkner in 1997. The model helps the organization to consider various options for the positioning of its products within the market on the basis of the price and the perceived value. The Bowman’s Strategic Clock includes eight different positions which include low price and low value-added, low price, hybrid, differentiation, focused differentiation, risky high margins, monopoly pricing, and loss of market share. The key focus of this model is to review the organization’s position as compared to the position of the competitors.

The need for the Bowman's Strategy Clock

Bowman's Strategy Clock is used by organizations to evaluate and analyze the present strategies and to plan the future organization position. The use of this model helps the organization not only in analyzing its strategic position but also helps to bring change in its business strategies on the basis of the current position. This model also helps in improving the competitiveness in the market by graphically representing the product positioning on the basis of the perceived values and dimensions of price.

By using this model, the organization can also investigate how the product can be positioned to ensure maximum competitive advantage. The Bowman Strategy Clock features eight possible strategies on the basis of the perceived price and value. 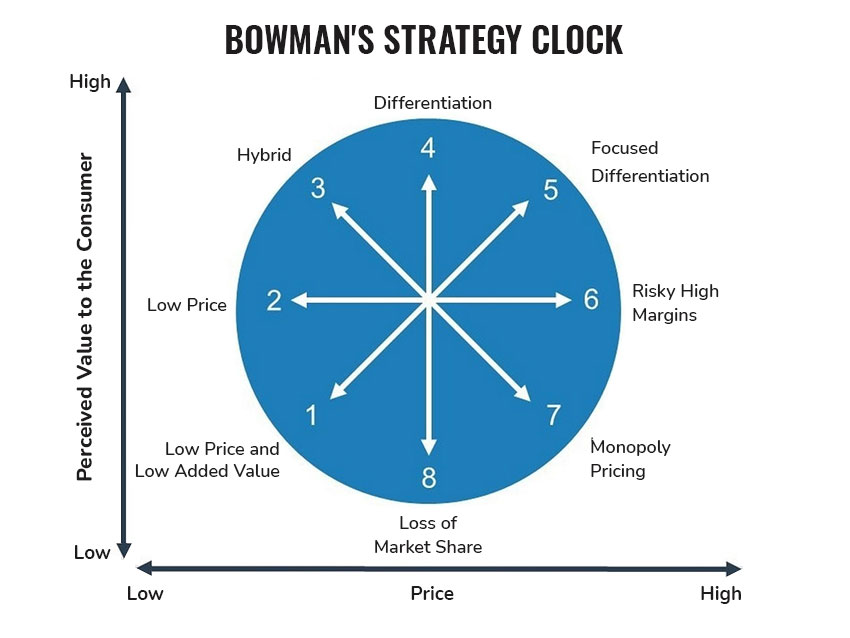 How to apply the Bowman's Strategy Clock?

All of us are well aware of how famous BlackBerry was at a time as an electronics brand. It is a brand of smartphones, tablets, and other services that have achieved the leading position in the smartphone market. However, BlackBerry lost its dominant position in the market owing to the lack of consumer insight, poor design of the products, and success of android and OS platforms.

BlackBerry was one of the most dominating and prominent smartphone brands that have achieved significant success in the market due to its higher status and the capability to bring email services to handheld mobile devices. However, some of the strategic initiatives of BlackBerry resulted in the failure of the company in the later years of operation. BlackBerry kept sticking to the QWERTY keyboard whereas the leaders in the smartphone industry such as Apple provided a full touch screen interface to the customers. Along with this, various other smartphone companies came up with video chatting, sharing photos, playing games, and various other features which resulted in the failure of BlackBerry. The design of the Blackberry phones is also one of the major issues being faced by the company. BlackBerry Priv shows resistance to change which also contributed to the failure of the company. Moreover, smartphones also gained significant importance in the market due to the ability to install any kind of application on these phones from games to educational apps which also resulted in a decline in the demand for Blackberry phones. The customer also started to face difficulty in using Facebook and Twitter and other applications on Blackberry phones and thus, shifted to smartphone consumption. In addition to this, the greatest issue being faced by Blackberry was lack of consideration of the competition in the market which is a major contributing factor to the failure of the organization as the company had a lot of assets and capabilities to embrace change but due to a lack of focus on innovation and reluctance to change, the company lost its market share in the industry.

This shows that Blackberry falls into the loss of market share category as the company adopted medium to high prices for its low-value goods to the customers. However, BlackBerry can regain its lost market share in the industry by focusing on Product Differentiation which is the opposite of the loss of the market share strategy. The use of this strategy can help the organization to ensure higher customer satisfaction.

Thus, Bowman Strategy Clock is one of the useful strategy analysis and positioning tools which can help the organization to determine the business strategies on the basis of the two dimensions. Focusing only on the prices without consideration of the customer value can result in the failure of the organization.

Ultimate Guide to Use of MOST Analysis in Planning