Scenario Modeling as a tool for Strategic planning

This sounds very simple but scenario planning and management are some of the most difficult situations for the organization. The scenario model focuses not only on analyzing the possible scenarios and uncertainties but also helps in strategic planning considering the market uncertainties.

The need for the Scenario Modeling

How to apply the Scenario Modeling?

The idea for the application of the Scenario Modeling looks very simple but we need to consider the steps that can be implemented to engage in the scenario planning.

There are four steps involved in the scenario modeling which include determining the driving forces, identifying critical uncertainties, planning the range of the plausible scenarios, and discussing implications of different situations.

Speaking of exemplification of the implementation of this model, Tesla Scenario Modeling will be a perfect example to illustrate the implications of this planning model.

The first step in the application of the Scenario Modeling is to identify the critical uncertainties on the basis of the results of the PESTLE analysis. Suppose, through the PESTLE analysis, it is found that the major driving factors include the US-China cold war, lack of technological advancement, up to $ 7500 of tax credits by the federal government for the purchase of the electric plug-in vehicle, implementation of FAME II program, declining US GDP, rising fuel prices, increasing concern for sustainability and implementation of new rules and regulations.

The two major risks and uncertainties that can be faced by Tesla include negative impacts associated with the US-China cold war and the lack of effective hardware and technology available to the company to facilitate fully autonomous driving cars. 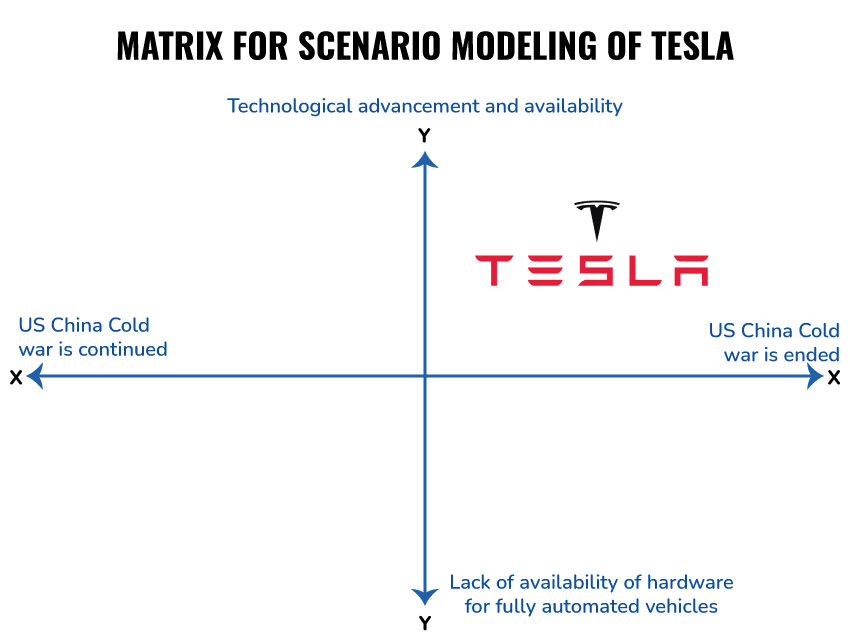 To deal with these issues, Tesla needs to pre-plan various strategies. Tesla can expand locally or in other international markets to deal with the impacts of the US-China cold war. Tesla can also plan to invest in technology and infrastructure to manufacture high-quality self-driving cars and to maintain its competitive position in the industry.

A guide to Gap Analysis for strategic planning